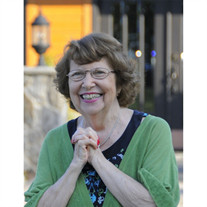 Ocie Farmer Newlon, a beloved wife, mother and friend, passed from this world on Saturday, March 6, 2021, of natural causes associated with declining health related to Alzheimer's. Ocie has been reunited in heaven with her husband Don and daughter... View Obituary & Service Information

The family of Ocie F. Newlon created this Life Tributes page to make it easy to share your memories.

Send flowers to the Newlon family.