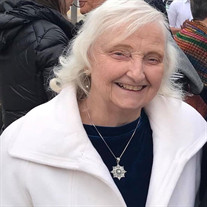 Marilyn Jane Furney Baillie went home to be with her Lord Jesus on Monday, October 26, 2020.  Born April 10, 1944 she was preceded in death by her parents Arthur W. Furney, Sr, and Mildred Ruth Hardman Furney Betz, and step-father Milton J Betz of Ohio. She is survived by her husband of 58 years, David Stuart Baillie, of Morristown, Tennessee. Also surviving are her children David Allan Baillie (Jenny) of Greenwood, Indiana, and Pami Baillie Ballington of Morristown, Tennessee, and a semi-adopted daughter from Brazil, Fatima Keeley (Jason) of Shortsville, New York.   Grandchildren include Madison and Baillie Baillington, of Morristown, Tn; Mia and David Jackson Baillie of Greenwood, Indiana, and Jacob Keely of Shortsville, New York.    She is also survived by her brother Arthur W Furney, Jr (Donna) of Canton, Ohio and Virginia (Will) Mayle of Philippi, West Virginia and many nieces and nephews. A 1962 graduate of Canton South High School, Canton, Ohio, she married two weeks following her high school graduation and spent 58 years with the love of her life.  A long-time member of North Industry Christian Church in Canton, Ohio, she moved to Gaffney, South Carolina in 1973 with her husband and children. She was a member of First Baptist Church of Gaffney, SC.  While living in Gaffney, she worked as the executive secretary of the Cherokee County MLS, graduated from the Realtor Institute of Greenville, SC and worked with Pioneer properties in Gaffney, before spending 20 years as the plant manager of Garment Technology, Incorporated.  She also served as a hospice volunteer during her year there. Upon retirement, with her husband, she moved to Morristown, TN where she became a member of First Baptist Church of Morristown.  She served in a volunteer capacity at the church at First Love on Main and with the bereavement commitment. She loved her Lord and lived her life in service to Him.  She enjoyed traveling and was able to visit many countries in her lifetime. She loved taking care of friends and family and practiced hospitality in all of her interactions with people.  Her grandchildren were a special source of joy in her life and she loved spending time with them Funeral services will be held on Saturday, October 31, at 11:00 am at First Baptist Church of Morristown, TN, and a grave side service will be held at Sandy Valley Cemetery in Waynesburg, OH on Monday, November 2 at 10:00 am.

The family of Marilyn Jane Baillie created this Life Tributes page to make it easy to share your memories.

Marilyn Jane Furney Baillie went home to be with her Lord Jesus...

Send flowers to the Baillie family.