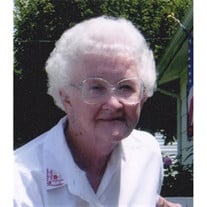 Marildia Pearl Furches, age 96 years of Morristown, TN and formerly of Dublin, MD passed away at 10:15 pm on Wednesday, May 5, 2020 at the SpiriTrust Lutheran Village in Shrewsbury, PA. She was the wife of the late William Harold Furches to whom she was married for 47 years. Born in Tazewell, VA on February 16, 1924, she was one of six children of the late John Henry and Mary Magdalene (Crouse) Mitchell. Pearl, as she was known to family and friends, moved to Maryland in the early 1940's and worked for the Glenn L. Martin Aircraft Factory in Middle River, MD during World War II. It was here that she met her husband. She also worked for the Bata Shoe Company in Belcamp, MD for more than 20 years. Pearl and Harold moved to Morristown, TN from Dublin, MD in 1984. She was a member of the then Evangelical Methodist Church in Dublin (now Reformation Bible Church) and then became an active member of the Open Door Baptist Church in Morristown for almost 30 years. Pearl was a volunteer with the Department of Social Services in Morristown for over 25 years and especially enjoyed working with Toys for Tots. She also served as a member of the Morristown-Hamblen Healthcare System Auxiliary for 19 years She is survived by two sons: Lloyd Harold Furches of New Freedom, PA and Danny Lee Furches of Columbia, MD. She is also survived by 8 grandchildren, 14 great grandchildren and 2 great great grandsons. Two sisters: Mary Belle Dowden of Centerburg, OH and Lorena Foster of Talbott, TN. She was also preceded in death by her son, Michael Duane Furches. A public viewing will be held at Harkins Funeral Home, 600 Main St., Delta, PA on Friday, May 8 from 2 to 4 pm. Graveside services and interment will be held Monday, May 11, 2020 at 11:00 AM in Sunderland Cemetery in Talbott, TN under the direction of Mayes Mortuary of Morristown, TN. In lieu of flowers, contributions to the SpritTrust Lutheran Office of Philanthropy , 1050 Pennsylvania Avenue, York, Pa 17404

Marildia Pearl Furches, age 96 years of Morristown, TN and formerly of Dublin, MD passed away at 10:15 pm on Wednesday, May 5, 2020 at the SpiriTrust Lutheran Village in Shrewsbury, PA. She was the wife of the late William Harold Furches to... View Obituary & Service Information

The family of Marildia Pearl Furches created this Life Tributes page to make it easy to share your memories.

Send flowers to the Furches family.