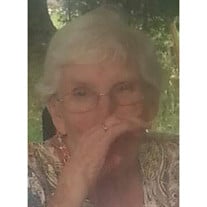 Frances Marie Ward, 69 of Morristown, passed away Wednesday, April 15, 2020 at UT Medical Center. She was the daughter of the late Felow and Charlise Buckner of the Mohawk Commmunity where she lived most of her life.  Also preceding her in... View Obituary & Service Information

The family of Marie Ward created this Life Tributes page to make it easy to share your memories.

Send flowers to the Ward family.