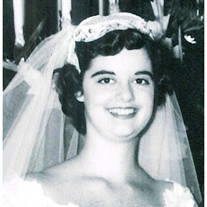 Marian Louise Felknor Dafferner passed away peacefully on April 29, 2020, after battling the muscle disease, polymyositis, for 24 years. Marian was born in Knoxville, TN, on November 10, 1936, to Wilson A. Felknor and Margaret Tillery Felknor. Marian had one brother, the late William A. (Bill) Felknor, who she dearly loved. Marian attended Central High School in Knoxville where she was band sponsor. There she met the love of her life, husband Bob. Marian and Bob were married in 1955. She attended the University of Tennessee and was a Phi Mu. Marian was a Past-President and lifetime member of the PTA, member of the Ladies Reading Circle and Past-President, 1982-1983. She was nominated for First Lady of Morristown in 1996. Marian was a member of the DAR and First Presbyterian Church of Morristown, where she taught Sunday school. She proudly served on the Board of Directors of Friends of Hospice. Marian also enjoyed a lunch bunch that included Carolyn Barclay, Frances Rose and Mary Lynn Bales and loved visits from special friends Penny Rogers and Louise Ridlen.  She worked at J.C. Penney's for twenty-five years, specializing in boys and girls merchandise. Marian was a devoted wife, mother, grandmother, aunt and friend. She is survived by her loving husband of 64 years, Robert W. (Bob) Dafferner, her four children, Beth Dafferner Dover (Chip), Dana Dafferner Cook (David), Donna Dafferner Wolfe (Gerald), Frank W. Dafferner along with five grandchildren, Teddy Dover, Andrew Dover, Ben Wolfe (Maria), Avery Wolfe (Sydni), Casey Wolfe and her great granddaughter Elizabeth Noel Wolfe and various nieces and nephews. The family extends deep gratitude to her caregivers from All Care and Amedisys Hospice. In lieu of flowers, memorial donations may be made to the charity of your choice. Her family invites friends to Mayes Mortuary on Friday, May 1, 2020 from 12 Noon until 5:00 PM, to pay their respects at their convenience. Graveside service will be held at 3pm on Saturday, May 2nd, at Lynnhurst Cemetery in Fountain City. Services entrusted to Mayes Mortuary of Morristown, TN.

Marian Louise Felknor Dafferner passed away peacefully on April 29, 2020, after battling the muscle disease, polymyositis, for 24 years. Marian was born in Knoxville, TN, on November 10, 1936, to Wilson A. Felknor and Margaret Tillery... View Obituary & Service Information

The family of Marian F. Dafferner created this Life Tributes page to make it easy to share your memories.

Send flowers to the Dafferner family.