Plant a tree in memory of Ocie
An environmentally-friendly option 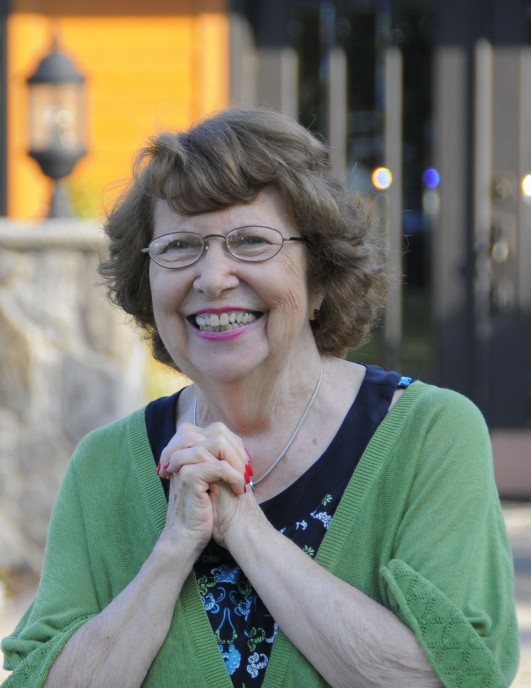 Ocie Farmer Newlon, a beloved wife, mother and friend, passed from this world on Saturday, March 6, 2021, of natural causes associated with declining health related to Alzheimer’s. Ocie has been reunited in heaven with her husband Don and daughter Nancy Jane and countless relatives and friends. Ocie was born on July 11,1930 to Ettie and Mack Farmer of Creston, NC. Ocie was the youngest of six children. Her siblings were Raymond, James, Lester, Vernon Farmer and Alice Farmer Taylor Johnson.

Ocie was the strongest woman ever known, particularly to her children. She was not afraid of anyone or anything. Her quiet, pleasant demeanor did not reveal her inner true strength; but this strength transformed a young girl on a rural farm into a successful health care professional. She had four older brothers who taught her to be tough and to shoot a gun with accuracy. Her marksmanship in shooting competitions resulted in monetary rewards that she used to buy new dresses. She watched as her older sister was taken out of school at an early age to help relatives and young mothers care for the raising of their babies.

Ocie realized at a young age that education would be her path to leave poverty. During winter months, when travel to and from school was difficult, Ocie stayed with one of her teachers so as not to get behind or delay her studies. Planning well in advance for her high school graduation, she asked her school principal to approve a plan to graduate high school in three years. Since there were three in her graduating class--herself, another girl, and one boy, the principal said she would have to convince the other two students in her class to do the same. Consequently, the girl was in favor of the plan, but the boy had to be pushed along. Nevertheless, the three of them completed four years of courses in Ocie’s three-year timeframe.

Ocie was encouraged to continue her education by her brother James. As a miner in Morgantown, WV, James and his wife Mae became her guardian until she finished nursing school at Mon General Hospital. While in nursing school, her sister in-law Mae and Edith Newlon set up a blind date for Ocie with Edith’s brother, Donald Newlon. This date resulted in their 67 years of marriage.

Those who knew Don Newlon have heard his many tales of adventures. Ocie did not hold him back from his fun, but she did curtail some of his ideas. Before they married, Don wanted to spend a summer college break fighting forest fires out west. Ocie informed him that if he went off on that trip, she would not be waiting for his return. He changed his mind about fighting forest fires.

Once Don’s military service was completed, relocating to West Virginia, Ocie continued working at the Veterans Hospital in Clarksburg, WV. She went back to school for training in administering anesthesia and became a nurse anesthetist. She spent her career at the VA and retired  after 33 years of service. Not quite ready for “retirement,” Ocie began to work as a traveling nurse anesthetist. She traveled the US for another 22 years, working until the age of 77. She served in hospitals in Wheeling, WV, Dunedin, FL, Knoxville, TN, Toledo, OH and Barboursville, KY where she befriended many.

Ocie’s success encouraged and probably pushed Don into the same career path. During her working career, she was active on both the state and national level with the American Association of Nurse Anesthetists and the Association of Veterans Administration Nurse Anesthetists. Ocie and her husband held board positions and served as President, Vice-President and Secretary during their AANA membership time. A highlight of Ocie and Don’s participation in AANA was a trip to Russia in 1973, where the group exchanged current medical practices with their Russian colleagues. This trip was one of the first opportunities to enter Russia, when that country was just beginning to open to tourism.

Ocie Newlon was truly the example of a modern American woman who rose out of poverty and set a path of success for her family. She believed in a strong work ethic, service to those in need, and no excuses. She birthed four children, one of whom was afflicted with health problems that required special care, medical travel and research. Ocie provided leadership for the West Virginia Association for Blind Athletes in which her daughter participated.

Ocie lived her life in quiet dignity. She was an avid cook, gardner, seamstress, girl scout leader, devoted daughter and sister, wife, mother, and grandmother. Each of her children and grandchildren have stories to tell of her inner strength. Each child held a special place in her heart. Diane was her first born, Donnie was her favorite and Becca was her baby. And of course, Nancy Jane was the sweetest of all. Don and Ocie were active members of The Bridgeport, WV, United Methodist Church and after moving to Jefferson City, TN, they became active members of First Baptist Church of Morristown, TN. In her final years, Ocie attended ALPS Adult Day Services, where she received compassionate care, therapeutic services and professional support as her health declined.

The family would like to sincerely thank ALPS, Deborah Huntsman, Linda Perry and Cheryl Mooneyham and all the loving caregivers who have assisted her husband Don, her daughter Rebecca, and her entire family over the past 12 years. Ocie was adamant that her family not have a community funeral service. The immediate family will celebrate Ocie’s life and legacy this summer at the family cabin retreat in Queens, WV, and commit her ashes to the Lord.

Plant a tree in memory of Ocie by clicking here.
To send flowers to Ocie's family, please visit our floral store.

Plant a tree in memory of Ocie
An environmentally-friendly option

Plant a tree in memory of Ocie

1 tree planted in memory of Ocie

There is 1 photo available in the gallery

Mom liked This Song.
O Lord my God, when I in awesome wonder
Consider all the worlds Thy hands have made
I see the stars, I hear the rolling thunder
Thy power throughout the universe displayed

[Verse 2]
When through the woods, and forest glades I wander
And hear the birds sing sweetly in the trees
When I look down, from lofty mountain grandeur
And see the brook, and feel the gentle breeze

[Verse 3]
And when I think, that God, His Son not sparing
Sent Him to die, I scarce can take it in
That on the Cross, my burden gladly bearing
He bled and died to take away my sin

[Verse 4]
When Christ shall come, with shout of acclamation
And take me home, what joy shall fill my heart
Then I shall bow, in humble adoration
And then proclaim: "My God, how great Thou art!"

Our kin passed to mom, she passed to me what now is considered superstition. This one she claimed is one reason what sealed the reason for the 2nd date allowing love enter for her yes to dad’s proposal for marriage.

When you name your child, if it’s initials spell a word, that word brings a bit of luck for the child.
OFF- Ocie Francis Farmer
DEN- Donald Eugene Newlon
When she married
ON- Ocie Newlon
She claimed the luck stronger using middle initials.
OFEN- Ocie Frances Eugene Newlon [she’d say you don’t need the T to hear the word.]
Mom claimed OFF to ON and OFEN lucky.

I’m DEN, Donald Eugene Newlon II, Yes I’m also lucky as was mom. My best guess that superstition is a word for those that don’t want to experience it. Even though our family was very dysfunctional, despite our Ills, troubles, and transgressions, we are lucky. For example, I get this indescribable feeling, I just know beforehand usually that I’m going to win a drawing and without this feeling I know I’m contributing to whatever the fundraiser. These things happen daily driving, working, playing etc. Before being notified I knew and felt the pain in my hand, I called them, my son got bit by a dog and again my other son broke his collarbone. It’s weird to many, to me it’s not superstition it just is. but, mostly I’m lucky and blessed to know my creator. A knowledge of Biblical text passed from the beginning through the age of the Laws, and now the age of Grace, the Signs, and Wonders I have experienced that seal my faith. I’m glad my mom passed on our kin’s superstition because I know that I know I’ll see many family and friends in eternity. Especially Mom

My Grandfather Mack passed when I was 16. He was in a coma nearly a month. Many family came during that time mom was constantly found reading to him the Bible. Finally "I ask mom why not read him other stories are you trying to save Grandpa ? Mom said he likes hunting and fishing stories like you but Grandpa is already saved, so nothing is as comforting as Bible stories as he passes this life to eternity." Many years later it came up mom had read him the entire New Testament. Now I wonder if why he hung on so long was to make sure he would see his daughter and family again.

Mom passed @ 9:30 am as Cyndi & I were driving to give one last embrace. We met with family and friends. The day soon became a wake. A prayer felt celebration of Mom's life and legacy reminiscing photo albums, stories unfolding our family's past, present and future hopes grounded in faith, the gospel message, and the wonder of absent the body yet present with the Lord. I must continue the whisper in your ear, whatever; you do from now make sure you come see us in heaven when it your time to come.

Thank you for your prayers which are fully felt.

A Memorial Tree was planted for Ocie F. Newlon

Plant a tree in memory of Ocie