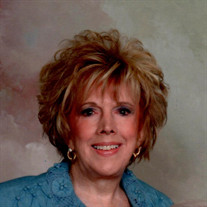 Paula Pounds Wallace, 91, was graduated to heaven Friday, February 11, 2022, peacefully at her home surrounded by her 4 children. She was born in Little Rock, Arkansas, on August 10, 1930, to Paul and Evelena Pounds. Because of her severe asthma, the family moved to Tucson, Arizona, and then in 1934, to El Paso, Texas. Her father was a pharmacist and Paula grew up loving to work in her father’s drug store after school. She attended El Paso High School and Baylor University graduating with a degree in Family and Consumer Sciences. While at Baylor, she met her future husband, John D. Wallace. They were married in 1950 and celebrated 58 years of marriage untill John’s passing in 2008. In 1951, they moved to Knoxville while John was a salesman for Wallace Hardware Company. Paula contracted polio in 1952 and spent many months in Warm Springs, Georgia recuperating. The family moved to Morristown in 1955. Paula, having accepted Jesus as her Lord and Savior at a young age, was very active in First Baptist Church, playing the piano for the children’s Sunbeam group and teaching Sunday School for many years in the Junior High Department and adult ladies classes. In the early 1970’s, she was voted Mother of the Year at the church, an honor we all agreed she deserved! In 1973, she began studying sign language, first through the church, and then attending Tennessee School for the Deaf and Maryville College. In 1975, she became the Director of Deaf Ministries at the church, and for 30 years she ministered to the deaf families by interpreting in worship services, job interviews, weddings, funerals, educational classes and hospital settings. Paula was a charter member of Morristown’s GFWC Junior Reading Circle (a women’s literary and service organization), serving in various areas including president. She was an excellent seamstress, sewing many of her own clothes and her daughters’ clothes, and was very talented in knitting, needlepoint and refinishing furniture. Paula always helped John in entertaining his business friends and for many years did most of the cooking for the Wallace Hardware dealer shows, feeding hundreds of customers a day. She always wanted to use her home to serve and bless other people. She was known for her barbeque chicken dinners, chili dinners and her country ham breakfasts. She truly was a “hostess with the mostest!” Paula is preceded in death by her parents, her husband and her sister, Peggy Pounds Malone. Known as Grammie to her family, she is survived by her children: Tim and Becky Harris of Tyler, Texas; Doyle and Deanna Wallace, Lynn and Robin Dawson, Bill and Lisa Trusler all of Morristown; 12 grandchildren and 17 great-grandchildren. Her grandchildren are Stephanie Harris Pool, Paul and Nadji Harris, Bonnie Wallace Rebsamen, John and Shannon Wallace, Dan and Julie Wallace Lowery, Michael Wallace, Luke and Rebecca Dawson Murphy, Lindsey Dawson, Drew and Christine Dawson, John and Ashley Trusler, Will Trusler and Austin Trusler. The family wishes to lovingly thank our mother’s caregiver, Debra Ponder, for the faithful and sacrificial care she has given for the past 18 years. She has been a blessing to our family and to Mother’s quality of life. We would also like to thank Smoky Mountain Home Health and Hospice, Loretta Ramsey, and granddaughter Lindsey Dawson for their wonderful care this past year. The Celebration of Life service will be held at 11 am, Saturday, February 19, at First Baptist Church. Due to Covid, there will be no traditional “receiving of friends.” A private family burial will be held at another time. Donations can be made to First Baptist Church, 504 W. Main St., Morristown, TN 37814

Paula Pounds Wallace, 91, was graduated to heaven Friday, February 11, 2022, peacefully at her home surrounded by her 4 children. She was born in Little Rock, Arkansas, on August 10, 1930, to Paul and Evelena Pounds. Because of her severe... View Obituary & Service Information

The family of Paula Pounds Wallace created this Life Tributes page to make it easy to share your memories.

Send flowers to the Wallace family.