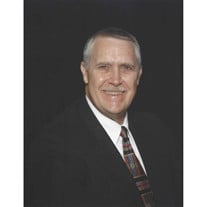 Oscar Verldon Hicks, Jr., age 78 of Morristown, Tennessee passed away on August 8, 2019.  He was a devoted follower of Jesus Christ.  He and his family moved to Morristown in 1971 and became members of First Baptist Church soon after.  There he served as a deacon and a member of the Media Ministry for over 30 years.  He served on the Stewardship Committee for the new sanctuary built in the mid-1980's as well as secretary of his Sunday School class.  He was devoted to the Father and made sure the family attended church every Sunday. Oscar was born in Pioneer, Tennessee.  Later the family moved to Lake City, Tennessee where he graduated from Lake City High School in 1959.  After attending East Tennessee State University, where he was a member of the Pi Kappa Alpha fraternity, he graduated from the University of Tennessee School of Pharmacy at Memphis in 1964 with his Bachelor's degree in Pharmacy.  While there, he was a member of the Kappa Psi professional fraternity.  He was later awarded an honorary Doctor of Pharmacy designation.  The majority of his pharmacy career was spent in independent pharmacy.  Early on he worked in pharmacies in Clinton and Greeneville, Tennessee.  In 1970, he, along with Joe Huntsman, Sr., opened Medical Center Pharmacy in New Tazewell, Tennessee.  He continued as owner/operator of that business until his retirement in 2011.  The pharmacy was later sold in 2015.  Medical Center Pharmacy was truly a family affair.  First, he treated all of his patients as family.  In addition, his wife, Sandy worked in the business office, his son, Derek joined him as a pharmacist in 1996, and his daughter, Kristie worked as a part-time pharmacist, joining in 2000.  In addition to work, the "Big O" also enjoyed camping, traveling, hunting, tennis, golf and attending University of Tennessee football and basketball games with friends and family. While it is difficult to summarize a life in a few short paragraphs, he was truly a man of God.  His faith was simple but firm.  His devotion to the practice of pharmacy reflected dedication and commitment.  His loyalty to family and friends was certain and sure. Oscar was preceded in death by his parents, Oscar V. Hicks, Sr. and Bonnie Freeman Hicks and his son, Trevor J. Hicks, who passed away as an infant. He is survived by his wife of 56 years, Sandra Lee Hicks, his son, Derek V. Hicks, and wife Lynn; daughter: Kristie L. Noble and husband Ralph, five grandchildren: Andrew, Abigail, Ashley Anna, Nicholas and Rebecca, his sister: Linda F. Wicker and brother, Rickey L. Hicks. Visitation will be held from 1:00-3:00 PM, Sunday, August 11, 2019 at First Baptist Church of Morristown, followed by a memorial service from 3:00-4:00 PM.  A processional for those wanting to attend will depart Mayes Mortuary at 9:00 AM, on Monday, August 12, 2019 for an 11:00 AM brief service at Valley View Cemetery in Elk Valley, Tennessee. In lieu of flowers, the family requests donations be made to First Baptist Church, ALPS or the Serenity House.

Oscar Verldon Hicks, Jr., age 78 of Morristown, Tennessee passed away on August 8, 2019.  He was a devoted follower of Jesus Christ.  He and his family moved to Morristown in 1971 and became members of First Baptist Church soon after.  There... View Obituary & Service Information

The family of Oscar Hicks, Jr. created this Life Tributes page to make it easy to share your memories.