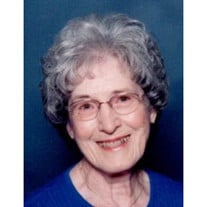 Louise Sentelle Pellett, 99 passed away January 1, 2020 at Regency Retirement Village.  Louise was born June 22, 1910 in Buncombe County North Carolina.  Orphaned at the age of five, she was sent, along with her younger brother, to live in an orphanage.  They were taken from the orphanage by their older sister to be raised in a loving, family environment.  Graduating from high school at age sixteen, Louise worked for a company credit union in Canton, North Carolina during which time she met, fell in love with, and married Gordon Sentelle. With their two children, Louise and Gordon left Canton in 1948 when Gordon's job with American Enka took them to Morristown, Tennessee. She served with devotion as wife, mother and homemaker for her husband, and eventually, three children.  Following Gordon's death in 1969, she went to work in the records department at American Enka.  Retiring after twenty years of service, she moved from her long-time, Enka Village home in the Lowland community to a house she bought in Morristown. On her birthday in 1997, Louise married Jackson R. Pellett before God and the Sunday-morning congregation of First Presbyterian church in Morristown where both were members.  Beginning married life at Jack's home in Morristown, they moved to Regency Retirement Village.  After Jack's death in 2010, Louise lived at Regency until her death. In addition to her husbands, Louise was preceded in death by her parents, five siblings, her daughter Christine Sentelle Smelcer, her stepson Jackson L. Pellett, and a host of relatives and friends. She is survived by her sons, Rick and Rusty Sentelle, her daughter-in-law, Darlene Sentelle (who was her angel), her son-in-law Robert Smelcer (Christine's husband), granddaughters Ellen Smelcer Partin and Amy Sentelle Hoyle, great grandsons Erik Partin, Noah Gorun and Elijah Hoyle, stepdaughers: Deb Weiler (Jim) and Ruth Manville (Gary), Pat Pellett, widow of Jackson L. Pellett, step-grandchildren Jackson D. Pellet (Karen), Rebecca Engler (David), Craig Annsa (Heather Quass-Annsa), Joellyn Manville (Jonathon Morrison) and nine step-great grandchildren. The family extends special thanks to the dedicated staff of Regency Retirement Village, Dr. Rajeev Gupta, Cory Carr FNP, Holly Murphy and her compassionate team of caregivers and Amedisys Hospice. Receiving of friends will be from 1:00 PM until 3:00 PM, Sunday, January 5, 2020 at Mayes Mortuary in Morristown. The funeral service will follow in the chapel with tributes lovingly delivered by family and friends. Burial will be at Bethesda cemetery following the service. In lieu of flowers, we request that donations in memory of Louise Sentelle Pellett be given to the discretionary fund of First Presbyterian Church of Morristown, Tennessee.

Louise Sentelle Pellett, 99 passed away January 1, 2020 at Regency Retirement Village.  Louise was born June 22, 1910 in Buncombe County North Carolina.  Orphaned at the age of five, she was sent, along with her younger brother, to live in an... View Obituary & Service Information

The family of Louise Sentelle Pellett created this Life Tributes page to make it easy to share your memories.

Send flowers to the Pellett family.