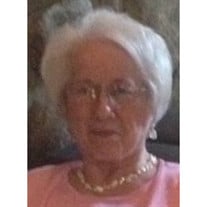 Lois Addison Jones was called home by her heavenly father on April 25, 2019 at the age of 87.  She was born in War, West Virginia, on July 31, 1931.  Her family soon moved to Bristol, Virginia where she was raised with her 14 siblings.  In 1953, she married the love of her life, Hiram Jones.  They moved to Morristown in 1960 where she worked side by side with him in his accounting practice.  She retired in 2009 from Craine, Thompson, & Jones where she was Office Manager.  Besides being a loving mother and grandmother, she was as active member of First Presbyterian Church for over 30 years and a former member of Ladies Reading Circle. Lois was preceded in death by her parents Thomas and Mary Frances Addison; brothers: Tom, Marvin Don and Samuel Addison; sisters: Helen Covey, Eva Cozzens, and Madge Samuel; and her son Thomas M. Jones. Lois is survived by her husband Hiram, son Ronnie, daughter Mira (James) Craine; grandchildren: Tim Jones, Carrie (Alex) Trexler and their mother Debbie Jones; grandsons Matt (Kristin) Craine, Bowe Craine and fiancée Mary Jo Pakkala, and granddaughter Abbe Craine; great granddaughters Hayley and Morgan Trexler, along with brothers David and Carl Addison; sisters Shelia Long, Cherrie Price, Susan Hill, Carol Clayman, and Emma (Sissy) Cozzens. The family will have a private service at a later date. Friends and family may sign the guest book online at mayesmortuary.com.  In lieu of flowers, a memorial can be made to First Presbyterian Church, 600 W Main St, Morristown, TN 37814.

The family of Lois A. Jones created this Life Tributes page to make it easy to share your memories.

Lois Addison Jones was called home by her heavenly father on...

Send flowers to the Jones family.