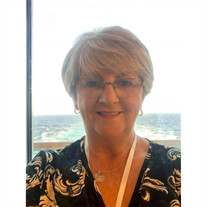 Lisa Dawn Taylor Bell, born Nov. 26, 1965, passed away on Good Friday 2021 at Fort Sanders Regional Medical Center in Knoxville, Tenn. after suffering a stroke at her home March 31. Bell, 55, of Talbott, Tenn., was full of life; a lover of nature, creative, opinionated and highly intelligent - as well as a true friend to everyone she encountered. She was disabled after a stroke more than a decade ago, but almost completely recovered in the years that followed and lived life to the fullest. She previously worked full-time at Formrite in the Morristown West Industrial Park, followed by Matsuo Industries in the Jefferson City Industrial Park. She was well-traveled, most recently visiting Los Angeles. She also traveled to the Caribbean Islands; Seattle; Portland, Ore.; Vancouver, Canada; and several U.S. beaches with her closest family members and friends. Bell, a devout Southern Baptist, is survived by her son and close friend, Mark Eric (wife: Kaila Anne) Bell, of Murfreesboro, Tenn., as well as her two grandchildren, Anna Kate and Eric Knox Bell, whom she cared for deeply. She is further survived by her loving spouse-soulmate of 23 years, Charles (Charlie Brown) Lester Hannah; mother, best friend and travel partner, Sandra G. Taylor; both of Talbott; as well as her close friend and brother, Scott D. (special friend: Amy) Taylor, of LA. Also surviving Bell are her special aunts, Teresa Dougherty, Debbie Shaver and Marie Rickard, along with several cousins and other extended family members, who she dearly cared for. She was preceded in death by her father, Donnie G. Taylor, who she held in her heart until her own passing; along with her maternal grandparents, James and Edith Rickard; and paternal grandparents, Willie and Maude Taylor; all of Talbott. A graveside service for family and friends will be announced soon on mayesmortuary.com, courtesy of Mayes Mortuary on W. Main St. in Morristown.

Lisa Dawn Taylor Bell, born Nov. 26, 1965, passed away on Good Friday 2021 at Fort Sanders Regional Medical Center in Knoxville, Tenn. after suffering a stroke at her home March 31. Bell, 55, of Talbott, Tenn., was full of life; a lover of... View Obituary & Service Information

The family of Lisa D. Bell created this Life Tributes page to make it easy to share your memories.

Send flowers to the Bell family.