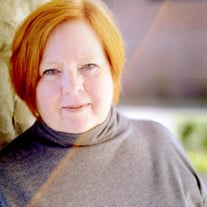 Kathryn (Kathy) Wilson Brimhall, the former Kathy Jean Wilson, passed away at home in Morristown, Tennessee, on March 26, 2022, after a brief illness. Kathy was born December 25, 1948, in Wisconsin Rapids, Wisconsin, to Thomas (Tom) Wilson and Cathleen (Colligan) Wilson. She grew up in Wisconsin Rapids graduating from Lincoln High School in 1967. Kathy attended Ripon College in Ripon, Wisconsin for two years before marrying John Heyer and moving to California and living in the south San Francisco Bay area in the early 1970s. Following her divorce she completed her bachelor’s degree at the University of North Carolina, Chapel Hill with a major in anthropology. Kathy then attended graduate school at the University of Connecticut in the Department of Anthropology, completing a master’s degree and PhD in anthropology in the late 1970s. During her graduate studies she spent one year functioning as a psychiatry resident in order to learn about the connection between culture and mental health. Kathy’s graduate mentor was psychiatrist Ron Wintrob MD, and her PhD research and thesis involved better understanding magical and health beliefs in a South Carolina sea island community. Upon completion of graduate studies Kathy worked as professor of sociology and anthropology at Lakeland College near Sheboygan, Wisconsin, teaching major courses in those fields. During these years she applied to medical school gaining admission to St. Louis University School of Medicine in 1983. During medical school Kathy met Conrad L Brimhall whom she married on May 24, 1986. She graduated from medical school in May 1987 and completed her internship in Obstetrics and Gynecology at St. Joseph’s Hospital in Milwaukee in 1988, before completing a three-year residency in psychiatry at the Medical College of Wisconsin also in Milwaukee in 1991. Kathy and Conrad lived in Sheboygan, Wisconsin from 1990 to 1993, where Kathy practiced psychiatry. From 1993 to 2008 they lived in Fond du Lac, Wisconsin, where Kathy practiced psychiatry until 1998, ending her practice in anticipation of starting a family. In 2008 Kathy wanted to escape the freezing weather of Wisconsin and the family moved to Lexington, Kentucky, and then in 2012 moved to Morristown, Tennessee. Kathy was a member of PEO in Fond du Lac, Wisconsin, Lexington, Kentucky, and most recently in Morristown, Tennessee. She was previously a member of the Fond du Lac, Wisconsin morning Rotary Club. Kathy and Conrad have hosted many international exchange students through Rotary, AFS, and other programs, and have had students from many countries including Mexico, Bolivia, Switzerland, Australia, China, and Germany. Kathy was an accomplished gourmet cook, a voracious reader, and loved to travel. She loved knitting, cross stitching, and most types of crafts projects. In her life she made visits to Mexico, Bolivia, Switzerland, French Polynesia, New Zealand, as well as most of the United States, including Hawaii. Kathy is survived by her husband, Conrad L Brimhall MD; a son, Christopher T Brimhall, 22; and a daughter, Kiri E Brimhall, 19. She is also survived by her sister, Carol Wilson, of Ellenton, Florida; and by numerous cousins. She was preceded in death by her parents. A memorial service is planned for April 30, 2022 at Mayes Mortuary in Morristown, Tennessee.

The family of Kathryn Kathy Brimhall created this Life Tributes page to make it easy to share your memories.

Send flowers to the Brimhall family.