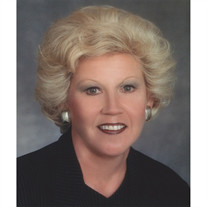 Julia (Judy) Pope Grizzell McGuffin passed away suddenly on August 20, 2021.  Judy was born on September 24, 1942 in Athens, TN.  Her family moved to Oak Ridge in 1944, where she later graduated from Oak Ridge Hugh School.  She attended the University of Tennessee, Knoxville and was a member of Kappa Delta sorority.  She married George McGuffin in 1963 and then moved to Morristown where she resided for her lifetime. Judy's first and greatest love was her family.  She and George also cherished the many Boston Terriers that were fortunate enough to be a member of the McGuffin family.  Judy was a gracious soul with a kind and generous spirit. She was always the first to arrive with comfort and compassion to anyone in need.  She was famous for her beautiful roses that she lovingly shared with everyone she knew.  Judy dedicated her life to serving her family, her many friends and her community. Judy was a life - long community activist.  She received the Lifetime Achievement Award from the Boys and Girls Club in 2010, where she served on the Board of Directors.  She was Board Chair of Kingswood School, Walters State Foundation and the Senior Citizens Center.  Also, she served on the Board of Girls, Inc, and was inducted into the Girl's Inc. Hall of Fame.  She served as President of the Hamblen County Cancer Society and was on the board of the Tennessee American Cancer Society.  Judy served on the United Way Board and was the Board Chair.  She also co-chaired the capital campaign for Alzheimer's Lakeway Program Services and was Vice President of the Morristown Area Chamber of Commerce.  Additionally, she was the Vice Chair of the Tennessee Arts Commission.  Judy was a loyal member of First United Methodist Church, where she actively served in many different volunteer positions. Judy was preceded in death by her father, John Pope Grizzell, mother, Dorothy (Bill) Grizzell Pruden and brother, John Timothy Grizzell.  She is survived by her husband of 58 years, George, their 3 sons, John Franklin (Whitney), George Patrick (Shenoa) and Michael Timothy (Shannon), 7 grandchildren, Hayden, Mary Chandler, Landen, Palmer, Addison, Jackson and Harper.  She also leaves her brothers and sisters in laws, Dick and Jan Jessee and Bob and Kaye Schwalb.  Her nieces and nephews, Taylor (Lori) Jessee, Christy (Brian) Gair, Julianne (Mark) Stapleton, Carrie (Shane) Hoffmeister, Bret (Jennifer) Jessee, Jay (Chris) Minnix and Brantley Grizzell. Funeral services will be held on Wednesday, August 25, 2021 at 4:00 PM at First United Methodist Church with a private family graveside.  Judy's chosen pallbearers are Dwann Black, Michael Bunch, Bryan Dickerson, Brian Gair, Brantley Grizzell, Crampton Helms, Robert Schwalb and Parker Smith. In lieu of flowers contributions may be made to Kingswood School, ALPS, Rose Center and Serenity House.

Julia (Judy) Pope Grizzell McGuffin passed away suddenly on August 20, 2021.  Judy was born on September 24, 1942 in Athens, TN.  Her family moved to Oak Ridge in 1944, where she later graduated from Oak Ridge Hugh School.  She attended the... View Obituary & Service Information

The family of Julia "Judy" McGuffin created this Life Tributes page to make it easy to share your memories.

Send flowers to the McGuffin family.