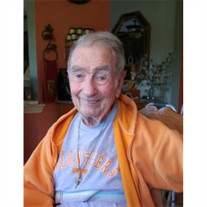 We are saddened by the passing of Joseph F. Coleman (Joe), 83 on January 3, 2021 at his residence in Morristown , Tennessee. Joe was born in Queens, New York on October 14, 1937 to Anthony and Catherine Coleman. A veteran of the United States Marine Corps, Joe honorably served his country. After the Marines; Joe, like his father and grandfather had a successful career with the New York City Police Department (NYPD).  During this time he married his wife, Karen McMullan in 1967. Over time, they had four children. While working full time at the NYPD, Joe successfully graduated from New York Institute of Technology with a bachelor's degree in Criminal Justice. After graduation, Joe was promoted to Sergeant. After almost 21 years of service with the NYPD, Joe retired in 1981.He continued his aviation career while working as a helicopter pilot for Island Helicopter on Long Island, New York. Joe later moved his family to Florida where he worked for the Martin County Sheriff's Department, followed by The Florida Department of Corrections as a Probation Officer. After 19 years in Florida, Joe and Karen moved to Morristown, Tennessee.  Joe became a Vol's  fan and was a member of The Elk's Lodge and the Moose Lodge. Joe also enjoyed camping, wood-working and spending time with his family. He was a member of St. Patrick Catholic Church. Joe is preceded in death by his father Anthony and mother Catherine Coleman, brother William Coleman and Son-in-law Matthew Lombardo. Joe is survived by his wife of 53 years, Karen Coleman, daughter Laura Lombardo, 3 sons Joseph (Kelly), William (Dawn) and Thomas Coleman. Two brothers  Anthony and Edward (Diane) Coleman and two sisters Kathleen Thierfelder and Mary Ellen (Gerald) Trepanier.  His grandchildren Kevin Lombardo, Kyle, Brendan, Erin, Catie and Thomas Coleman Jr. Visitation for family and friends will be on Thursday, January 7, 2021 from 4:00 PM until 7:00 PM at Mayes Mortuary with a Rosary to follow at 7:00. Family and friends will gather at the funeral home at 11:30 AM on Friday, January 8 to proceed to St. Patrick Catholic Church for a 12 Noon funeral mass officiated by Father Patrick Brownwell.  Burial and graveside services with Military Honors will follow at Bethesda Cemetery.

We are saddened by the passing of Joseph F. Coleman (Joe), 83 on January 3, 2021 at his residence in Morristown , Tennessee. Joe was born in Queens, New York on October 14, 1937 to Anthony and Catherine Coleman. A veteran of the United States... View Obituary & Service Information

The family of Joseph F. Coleman created this Life Tributes page to make it easy to share your memories.

Send flowers to the Coleman family.