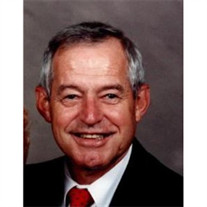 Isaac Dedrick Courtney, born May 4, 1934 in Rogersville, TN passed away peacefully at LifeCare Center in Morristown surrounded by his family. He was 85. He was preceded in death by his son Dedrick Andrew (Andy) Courtney, parents Jess Russell and Beulah Elkins Courtney, brothers John, Gale and Ralph Courtney, sister Louise Courtney Kinley and mother and father-in-law Conner Alexander and Nannie Eidson Smith. I.D.  is survived by his wife of 59 years Phyllis Smith Courtney of Morristown, daughter Lesa and son-in-law Scott Baker of Dandridge, daughter-in-law Stacy Courtney and husband Mark Froncek of Lenoir City, granddaughters Caroline and Chloe Courtney, Claire Courtney Hindman, and Isabelle Baker, grandson Conner Andrew Courtney and great-grandson Tucker Kennedy Hindman, all of Knoxville. He also leaves his brother Kenneth Courtney of Church Hill and sister Jessie Courtney Davenport, several nieces and nephews and great nieces and nephews. I.D. was raised in the Choptack Community of Hawkins County and graduated from Rogersville High School before serving in the U.S Army and graduating from railroad college in Spokane, WA. He retired from Norfolk-Southern Railroad after 40 years of service and spent most of his career as the Morristown agent. He worked many years at American Plastic Profile in Morristown following his retirement. He was a longtime member of First Baptist Church of Morristown,  past master of the Morristown Masonic Lodge, past patron of Order of Eastern Star, a Shriner and member of The Scottish Rite. I.D. enjoyed gardening and helping his family and friends and will be remembered for his generosity, work ethic and sense of humor. The family will receive friends from 5-7 PM Wednesday, July 10, 2019 at Mayes Mortuary in Morristown and the funeral service will follow at 7 PM. Graveside services will be held at 10:30 AM, Thursday, July 11, 2019 at Hamblen Memory Gardens, 5421 E. Andrew Johnson Hwy., Morristown.

Isaac Dedrick Courtney, born May 4, 1934 in Rogersville, TN passed away peacefully at LifeCare Center in Morristown surrounded by his family. He was 85. He was preceded in death by his son Dedrick Andrew (Andy) Courtney, parents Jess Russell... View Obituary & Service Information

The family of Isaac Dedrick Courtney created this Life Tributes page to make it easy to share your memories.

Send flowers to the Courtney family.