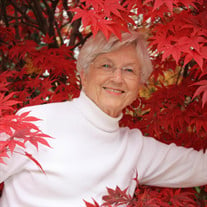 Not sure what to send?

Hilda Brooks Poole Holtzclaw of Charlotte, NC died peacefully on June 17, 2022. The daughter of Willie and Annie Poole, she was born in Durham, NC on February 2, 1930. Hilda graduated from Durham High School and married William (Bill) Holtzclaw in 1948. When they were first married, Hilda & Bill lived in South Carolina, Kentucky, and New York, eventually settling in Muskegon, Michigan. Hilda worked for many years at the Scott Paper Mill in Muskegon before retiring to do all the things that she loved to do. She was an avid gardener, quilter, crafter, and homemaker. After Bill retired, he and Hilda moved to Morristown, Tennessee, and were very happy there. Hilda had many friends and she continued to sew, craft, and garden. She was a loyal supporter of ALPS in Morristown and a dedicated PEO member as well. Hilda and Bill were active members of First Baptist Church of Morristown. In 2015 Hilda moved to Charlotte, NC, and lived at Cuthbertson Memory Care Village until her death. Hilda was preceded in death by her husband, Bill Holtzclaw, and her siblings, Winton Poole, Ellen Bridges, and Doris Jones. She leaves behind many nieces, nephews, and friends who will remember her kind and loving spirit. There will be a graveside service for Hilda at the Jarnigan Cemetery in Morristown on Wednesday, June 29th at 1:00 pm with Rev. Leroy Davis officiating. Memorial contributions may be made to ALPS.

The family of Hilda Brooks Poole Holtzclaw created this Life Tributes page to make it easy to share your memories.