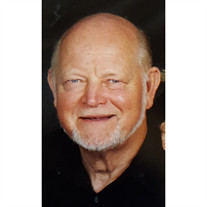 Dr. Max Weldon Brown OCTOBER 13, 1935 ~ July 18, 2019 Max Weldon Brown, age 83, of Morristown Tennessee, passed away July 18th, 2019. He was a devoted follower of Jesus Christ, a contributing member of First Baptist Church, Morristown for 39 years, where he taught Sunday School, sang in the choir, and served as a Deacon. He was also a passionate member and spokesman for the work of Gideons International in distributing Bibles, locally and worldwide. A graduate of Memphis State University, and the University of Tennessee Medical Dental School, Max was a twenty-year veteran of the U.S. Navy, Commander, USN (Ret), as well as a licensed Oral Surgeon, and practicing Dentist (DDS) in Morristown, where he was a dedicated member of his community. He was preceded in death by his beloved wife of 57 years, Margaret Anne Brown, brother Jerry Brown, and parents Irvin A. Brown and Leona (Brown) Howington. Dr. Brown is survived by his son David A. Brown and wife Lisa, daughters Dianne E. Barrow and husband Guy, and Deborah A. Thomas and husband Danny, eleven grand-children Meghan, Gary, Danielle, Erin, Marshall, Joseph, Allie, Hannah, Joshua, Caleb, and John Daniel, as well as seven great-grandchildren, and brothers Joe Brown, and Charles Howington. He also leaves behind many valued friends from his time in the Navy, as well as many beloved friends in Morristown. Max was well known for his broad generosity, sage wisdom, and wise counsel in both church and in the business world. A tenor, he greatly enjoyed singing and listening to classical music. He was a tournament level tennis player and loved to play and teach others to play chess. He was a patriot who greatly loved his country. Max was also a great encourager to others and a faithful intercessor in prayer.  He will be greatly missed by all who knew him well. Visitation will be held from 4:00-6:00 p.m., Thursday, August 1st, 2019 at First Baptist Church of Morristown, followed by a memorial service from 6:00-7:00 p.m.  A processional, of those desiring to attend, will depart Mayes Funeral Home at 1:00 p.m. on Friday, August 2nd, for a 2:00 p.m. brief service and military honors at the East Tennessee State Veterans Cemetery, 2200 E. Gov. John Sevier Highway. The family would like to personally thank the staff at the assisted living facility Dewitt Place for their genuine and compassionate care for Max and also highlight the extraordinary devotion and love of Ms. McKenzie Reed, RN, for her devoted love, friendship, and exceptional care for Dr. Brown over this past difficult year of battling cancer. In lieu of flowers, Dr. Brown desired that donations be made to Gideons International Evangelical Christian Association in the form of memorial Bibles, which the family requests be made in Dr. Brown's honor.

The family of Dr. Max Weldon Brown created this Life Tributes page to make it easy to share your memories.

Send flowers to the Brown family.