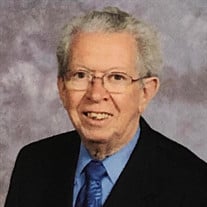 Rev. Clay Alex Krummel, Jr. of Morristown, TN passed away on May 13, 2022 at Morristown-Hamblen Healthcare System. Clay was born in Seneca, Missouri, to Clay Alex Krummel, Sr., and Dorothy Fern Gilman Krummel Walker on January 19, 1937. He received a Bachelor of Science in Education with a minor in music from Kansas State Teachers College. While at Kansas State, he was actively involved in the Baptist Student Union and the Drama department. Feeling a call to the ministry, he was ordained at First Baptist Church Seneca, MO, on December 8, 1959. He and his beautiful wife Betty Joe Sanders Krummel were married in Joplin, MO, on July 21, 1961. Their ministry began together as founding members of Harmony Heights Baptist Church in Joplin, MO, followed by Calvary Baptist Church St. Louis, MO, First Baptist Church Hialeah, FL, Byne Memorial Baptist Church Albany, GA and First Baptist Church Morristown, TN as the Minister of Education. While in Hialeah and Albany, he was instrumental in starting their Christian schools and served as the Administrator. He was a frequent contributor to many Southern Baptist monthly church periodicals, and led training conferences all over the United States for the Baptist Sunday School Board, for the Southern Baptist Convention at Ridgecrest Baptist Conference Center and part of the pioneers that began the first television ministry in Morristown. After retiring from full-time ministry, he worked at Morristown Bible Book Store, the Walters State Campus Cafe, and served as Director of Special Events, Drama Director and Church Historian at First Baptist Church, Morristown. However, his most enjoyed position was at the Welcome Desk on Sundays. He never knew a stranger and loved telling stories to anyone who would listen. In addition to his Educational leadership at churches, he was very involved with the music and drama programs and assisted in the premiers of Cantatas for the Southern Baptist Convention. After moving to Morristown in 1975, he worked with the theater programs at the local schools, the Morristown Theater Guild, Walters State Community College, Carson-Newman University and Rose Center as the set designer for over 150 community shows in addition to many productions held at First Baptist Church. He was preceded in death by his wife of 49 years, his parents and step-father Lynn Walker. He is survived by his brother Charles (Anita) Krummel of Pharr, TX; sister Lynette (Ralph) Forrest of Adrian, MO; sister in law Ramona Conklin of Morristown; sister in law Melba Harris of Yukon, OK, daughters Cassandra (Paul) Golden of Albany, GA and Melissa (Rob) Wheeler of Morristown; grandchildren Kristi (Jeremy) Heard, Paul (Stacy) Golden, Jr., Scott Golden and Maggie (Steven) Rose all of Albany, GA; Megan (Dylan) Patterson and Ryan Wheeler of Morristown; eleven great-grandchildren and one great-great grandchild; numerous precious nieces and nephews and a host of treasured friends. The family would like to thank the wonderful staff of the CCU ward at Morristown-Hamblen for their care and compassion. In lieu of flowers, the family would like donations to be made to the band/choir programs at Morristown-Hamblen High School East or the band program at Meadowview/East Ridge Middle Schools. The family will receive friends from 12-3 p.m., Wednesday, May 18, 2022 at First Baptist Church followed by the service and burial at Jarnagin Cemetery. Pallbearers are Theron Conklin, Dylan Patterson, Ryan Wheeler, Steven Rose, Rob Wheeler, Paul Golden.

The family of Rev. Clay Alex Krummel Jr. created this Life Tributes page to make it easy to share your memories.

Send flowers to the Krummel family.