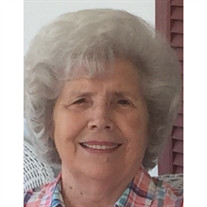 Betty Bernell Cope, age 87 of Morristown, TN passed away peacefully at her home surrounded by family on Tuesday, October 12, 2021 after a courageous fight with cancer. Bernell was born on August 8, 1934 to parents Lucy Mae Hipshire Barrett and B. H. Hipshire in lower Caney Valley, Claiborne County. She was raised in the Baptist faith and is a long-time member of Buffalo Trail Baptist Church. Bernell married the love of her life, Hubert W. Cope in 1950 and was married for 65 years before his passing. Bernell was the loving mother to five children, David, Jerry, Linda, Becky and Doug. She showed dedication, practiced hard work and took pride in everything she did. She was an especially proud mother of her five children and she worked very hard as they were growing up to make sure they always had everything they needed and that they looked neat. Bernell was preceded in death by her husband Hubert W. Cope, sons Hubert David Cope, Jerry Allen Cope, parents Lucy Mae Hipshire Barrett, Leonard Barrett, B. H. Hipshire, brothers Billy Joe Hipshire, Carroll Hipshire and son-in-law Michael C. Davis. Bernell is survived by her children Linda Davis of Morristown, Becky (Mike) Lynch of Emerald Isle NC and Doug Cope of Morristown. Her seven grandchildren that were blessed to call her Mamaw: Buffie (Thomas) Simerly of Morristown, Josh (Lauren) Davis, of Morristown, Ashley (Alex) Young of Asheville, NC, Katie (Brad) Domorski of Apex, NC, David Lynch of Emerald Isle, NC, Connor Cope of Morristown and Jake (Erica Stephens) of California. Also, seven great grandchildren: Isaiah (Becca) Simerly of Morristown, Sophia Simerly of Morristown, twins Emma and Lucy Young of Asheville, NC, Cameron Domorski of Apex, NC and Jacob and Cameron Stephens of California. One great great grandchild Clarice Simerly of Morristown. She is also survived by three very special women that she considered to be like her sisters Mildred Wolfe, Dorothy Howerton and Winnie McCracken. As well as special nieces and nephews, Katie Hipshire of California, Penne Hipshire of Georgia, and Bill Hipshire of Morristown. The family would like to give a special thanks to Caris Healthcare-Hospice. Justin Harris, Nettie Fay and the rest of the team did an amazing job taking care of our mother and also providing support to our family. The public may pay their respects on Thursday, October 14, 2021 from 1pm until 6pm and on Friday, October 15, 2021 from 10am until 12 noon at Mayes Mortuary. A graveside service will be held on Friday, October 15, 2021 at 2pm in Hamblen Memory Gardens with Rev. Mike Elkins Officiating.

Betty Bernell Cope, age 87 of Morristown, TN passed away peacefully at her home surrounded by family on Tuesday, October 12, 2021 after a courageous fight with cancer. Bernell was born on August 8, 1934 to parents Lucy Mae Hipshire Barrett and... View Obituary & Service Information

The family of Betty Bernell Cope created this Life Tributes page to make it easy to share your memories.

Send flowers to the Cope family.